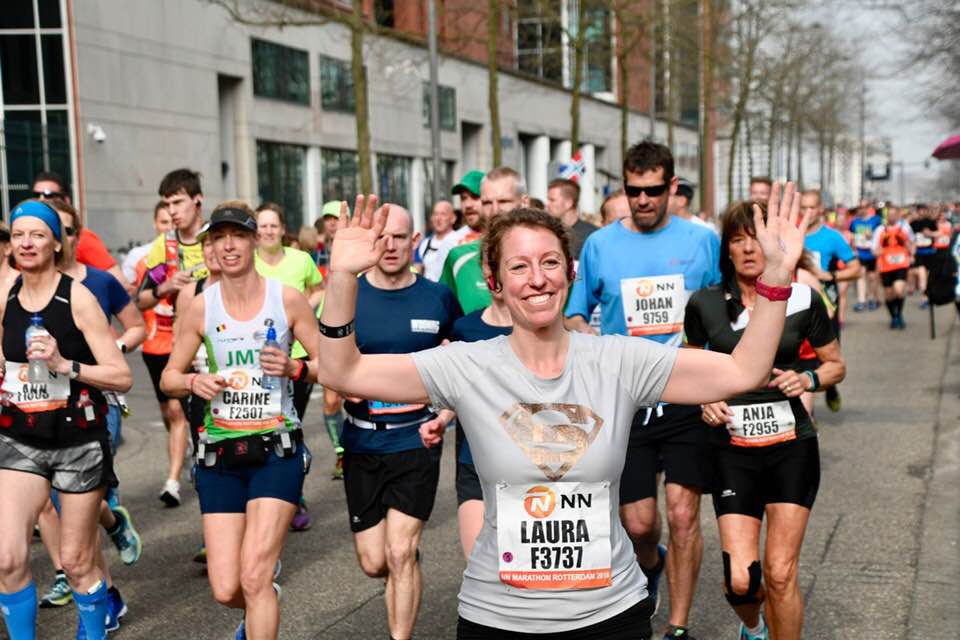 As promised a couple of days ago, I still owed you a full race report on the Rotterdam marathon… So here it goes! 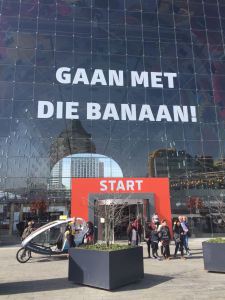 The expo and the day before

First of all, I have to say, I LOVE marathon expos. I love going there the day or two days before the race and just emerging myself in running gear, other marathons, …
To me it’s not just about picking up my race bib… It really energizes me to run the next day!
This marathon expo was pretty small, but still had everything. Shoes, KT tape, running clothes, compression socks, gels, beet juice, Run Disney, other races, body glide, …
I ended up not really buying anything, but just taking some pictures. 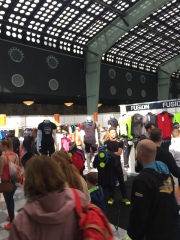 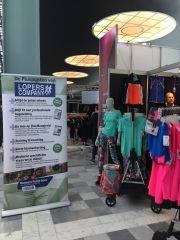 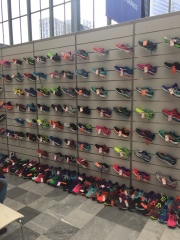 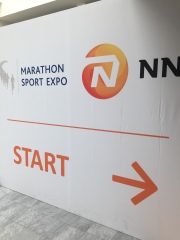 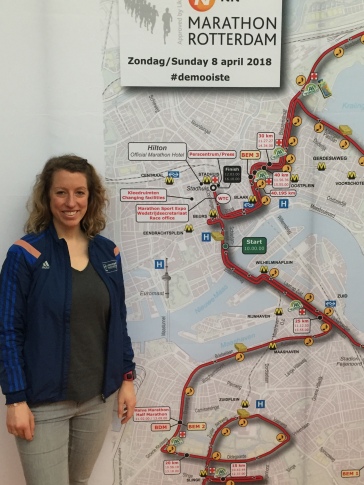 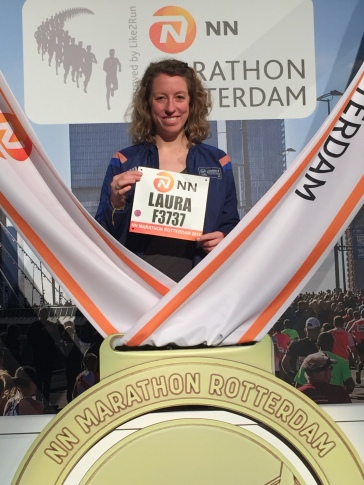 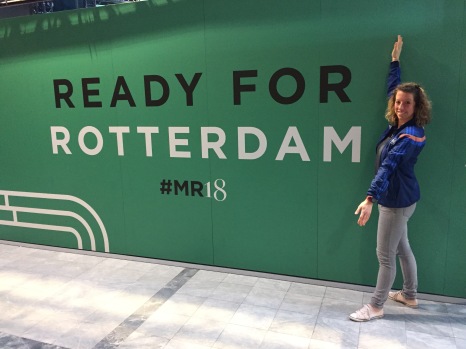 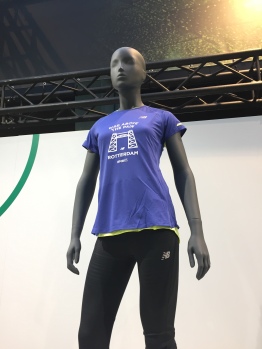 After the expo I went for a nice lunch at SUE Food, bought some milky oolong tea at Theemaas and some vegan protein powder at the Vitamin store. Shopping done! Time to head to the hotel. Our hotel was 20 minutes outside of Rotterdam and after we checked in my dad went to take a nap and my mom and I had a drink and some nachos on their sunny terrace.
That night I ate a big bowl of pasta, laid out all my gear and went to bed.

Of course at first I was too nervous to fall asleep, but I think around 11PM I managed to fall asleep anyway. I woke up at 6:45AM and was super nervous again, but I was ready! 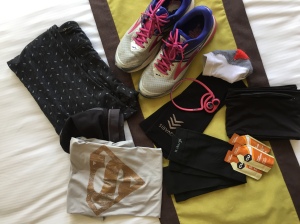 After eating a nice breakfast at the hotel (bread is my go to breakfast on long run days) with some 20 other runners, we headed out. Happy I was able to poop twice (sorry for the details, but this is important the morning of a marathon) before we even left the hotel, I felt totally ready to do this. 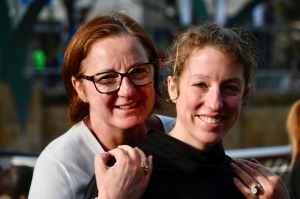 We took the subway to the start and arrived there when it wasn’t really busy yet. An hour before the start I decided I wanted to use the bathroom again. I immediately noticed the long lines and was very disappointed that there weren’t enough toilets… The line at each porta potty was at least 25 people long… I think it took me 20-25 minutes and when I finally found my parents again it was time to head to the start corral. I was in the last one and quickly looked for the 4h30min pacer. After we heard ‘You’ll never walk alone’, we knew it was time to start!

The first part of the race was on the Erasmus Bridge (uphill!), I immediately noticed that the pacer went out too fast. No big deal, as long as I stick to 6:23min/km splits on my watch I’ll be fine. I saw my parents after 1km, waved and was ready to run with a big smile on my face! 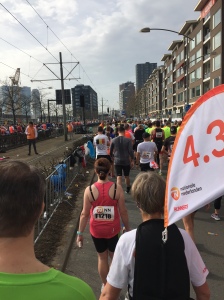 Seeing the pacer in the distance, I kept checking my watch and realized everything was going as planned.
I quickly noticed that my left ankle (that had been bothering me for a couple days before the race) was hurting again and that the sun was beginning to burn already. Don’t think about it, just keep running and drinking…
I kept thinking how badly I wanted to tell my parents about my ankle, but when I saw them at 13.5km I just waved and kept running. 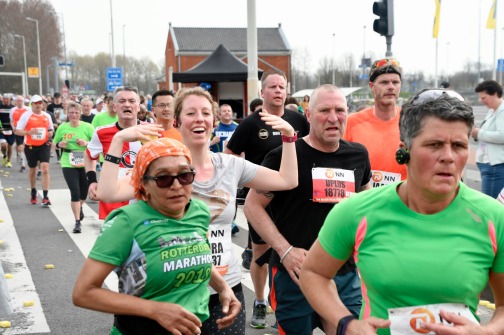 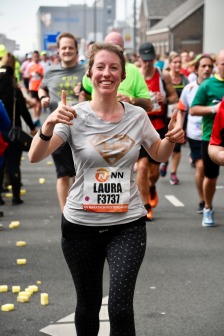 By the time I saw them for the third time (at 18.5km) the pain had magically disappeared. But now there was another issue, I had to use the bathroom and at every porta potty I passed (not many at all) there was a long line. With my 4h30min target in mind I didn’t want to lose 5 minutes just using the bathroom. So I kept running with a full bladder. By the time we passed by the starting area again, I thought ‘yes so many porta potties’. But they had locked them all… Disappointed and all cramped up I kept running… 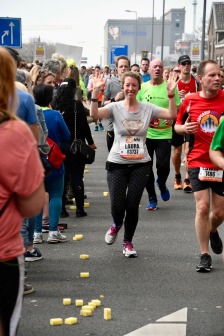 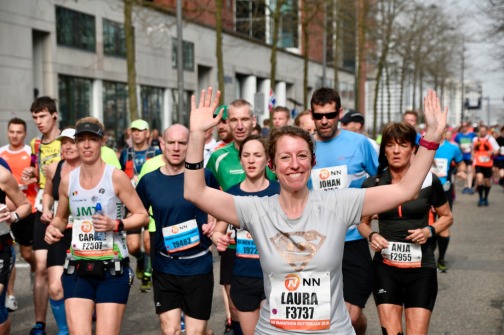 At 23.5km I saw my parents again. My mom screamed: ‘only a half marathon to go’!
I felt myself getting more and more tired with every passing minute. It’s funny how your mind works during a marathon, one minute you’re full of believe that you can do it and the next minute every part of you is begging for you to just stop running.

When I arrived at 28.5 my parents were there again.This gave me some much needed energy after we had just ran through another tunnel…

At the 34km point I FINALLY found a porta potty with no line. After 2 hours of cramps I thought I would feel relieved, but I didn’t… I realized I was beginning to feel very very tired, my legs were hurting and I was getting a bit overheated. Every wet sponge and cup of water handed to me was gladly accepted. Of course the pacers were nowhere in sight anymore, but I knew my time goal was still within reach.

At 37km I saw my parents for what I thought would be the last time. I signaled them how tired I was and that I didn’t think I could run anymore. At that point I had caught up with the pacers and knew I had to stick with them. I kept thinking: ‘just run and stay with them’. Kilometer 39 came around and this was a long part in the sun, on the hot pavement. I told the pacer I was done and she replied: ‘but you’re going to reach your goal’. ‘Yes I am’ I thought to myself.

1000 meter to go I read on the ground in front of me. 6 more minutes of running… I can do anything for 6 minutes… 500 meter to go. I heard my name from the sidelines and saw my parents again (to my surprise); I glanced behind me and kept going. I’m going to make it. Those last 500 meter were the most painful, but also the happiest. The moment you realize nothing can stop you from reaching your goal is indescribable… 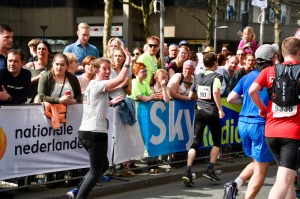 I finished in 4h28min57sec! I did it! Goosebumps!
I wanted to thank the pacers but they were already gone… I received my medal, a rose, water, sugared tea and a banana and went to find my parents… I walked around for minutes feeling disoriented, a little sick to the stomach but overjoyed at the same time that the race was over.
After what felt like the longest walk of my life I found my parents, hugged them with tears in my eyes and saw the tears in my dad’s eyes… They gave me a bouquet of roses and asked if I wanted food! What a silly question? Of course! 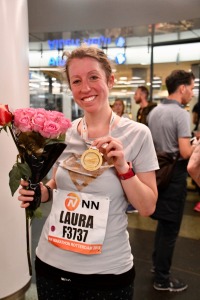 I was on my runner’s high for the rest of the day… Rotterdam, you were amazing! I’ll be back for sure!!!

But in the mean time, anyone have any suggestions for a fall marathon? Amsterdam? Bruges?